• Flow rates to 1400 GPM through a single valve

Large, unpredictable oil spills can defeat the most conservatively designed pollution control system. But while the cost of such a system can be prohibitive, the consequences of not controlling a spill can be equally catastrophic.

The AFL/Clark Oil Stop Valve (OSV) is designed to solve these problems.

The OSV has only one moving part, a ballasted float set at a specfic gravity between that of oil and water. When an oil spill occurs, the float loses buoyancy as the oil level increases until it finally seats itself on the discharge port. Thus, the oil spill is confined.

The Oil Stop Valve is fabricated from non-corrosive PVC and stainless steel.

Standard sizes are 4″, 6″, 8″, 10″, 12″ discharge piping. Larger piping systems can be accommodated by manifolding units together. Optional screening can be provided if necessary to prevent the dicharge of large floating solids.

Consider the OSV for those applications where oil spills are possible, but unpredictable such as electrical transformers, oil storage areas, andtransportation fueling systems. The Oil Stop Valve is a cost effective method to prevent a major disaster. 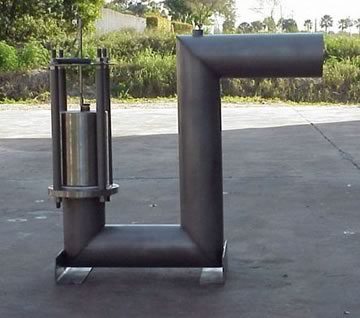